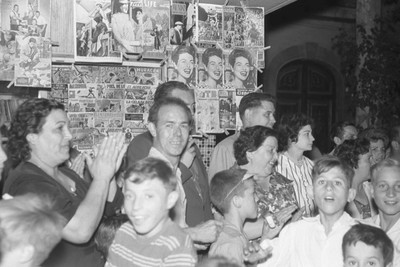 The photographic archive of the Pérez de Rozas at the Barcelona Photographic Archive. An exhibition on the graphic narrative about Barcelona. 1931-1954

Carlos Pérez de Rozas Masdeu (Madrid, 1893 - Barcelona, 1954) founded a dynasty of photojournalists which influenced the history of photojournalism in Barcelona during most of the 20th century. After more than 40 years of professional activity he died while covering the arrival of the ship Semiramis on 2 April 1954. He started to work for the daily press in 1912 and became confirmed in his profession a decade later when he received a commission from Barcelona City Council to document the overhaul of Montjuïc during the works to prepare it for the International Exposition of 1929.

The head of the family turned his activities into a business during the Second Republic with the incorporation of his two eldest sons, Pepe Luis and Carlos. Rather than have their photographs credited individually, they opted to credit all of them as 'Pérez de Rozas'. In 1932 the company became associated with the Crònica Gràfica, an institutionally-led initiative to create a systematic and continuous photographic archive of public life in the city. Other photographers of the day, such as Brangulí, Sagarra and Domínguez, also participated during the early years. The project laid the foundation stone for what would become the Barcelona Photographic Archive. At the time, it was a unique and highly innovative image archive project which recognised the value of photography for documenting the history of the city, and it lasted until 1990s. This explains why the Photographic Archive has such a large number of these photographers' photographs in Barcelona City Council's collection.

Between 1936 and 1938, the Pérez de Rozas also worked for the CNT-FAI by documenting revolutionary conquests and life in the rear-guard. These photographs have been little known until now. After the war, somewhat paradoxically, this did not prove to be an obstacle in exercising a prominent role as photographers in Barcelona during the Franco dictatorship.

The exhibition covers three periods, the Second Republic, the Civil War and the post-war period, almost twenty-five years of the Crònica Gràfica, the first institutional photographic archive created in the city. During this period, the head of the family, Carlos Pérez de Rozas Masdeu (Madrid, 1893 - Barcelona, 1954) and his two sons were close witnesses to the radical transformation photographic language underwent in Barcelona, Europe and around the world.

The exhibition contains 123 photographs, most of them the photographer's own prints, together with examples of the press of the day containing their photographs and 600 more photographs which can be seen on three interactive digital platforms, one for each of the periods covered. A virtual exhibition has also been created and a catalogue has been published, Pérez de Rozas. Crònica Gràfica de Barcelona 1931-1954, co-published by Barcelona City Council and the Efadós publishing company.

A characteristic feature of the Second Republic was its complexity and the images chosen for this section of the exhibition show how the Pérez de Rozas depicted the very varied events of the day, which included attacks, robberies, fires, bloody strikes, popular festivals and sporting events. Some of the photographs they took provided material for the first years of the Crònica Gràfica of Barcelona and they contributed to the construction of a new collective imagination.

During the Civil War the Pérez de Rozas actively cooperated with the CNT-FAI. They covered political mass meetings in the squares and streets of the city, marches by the Popular Army, the homages to Buenaventura Durruti and the devastating effects of bombardments. Many of these photographs were published by papers such as Solidaridad Obrera, Umbral and Campo! The latter, a weekly publication, commissioned them for a task to which they devoted a great deal of energy, a series of photographs depicting the collectivisation of agriculture around Catalonia.

The Pérez de Rozas continued with their work during the Franco period and they played a leading role in establishing the new regime's official iconography. The greater part of their photographic production involved covering all kinds of events which set the seal on the installation of National Catholicism, such as open-air masses, Stations of the Cross, military marches and homages to the fallen on the Nationalist side. Newspapers such as La Vanguardia, Solidaridad Nacional and La Prensa and weeklies such as Fotos, were the main publishers of their photographic output.

The exhibition also includes some documents and personal items which show the course of this family's work at the house-cum-studio in the Ronda Universitat and at Barcelona Town Council.

The exhibition has three digital kiosks showing a wide selection of photographic reports during the Second Republic, the Civil War and the early Franco period. They include more than 600 photographs, mostly unpublished ones, and they can be consulted by means of touchscreens. The photographs are arranged in thematic groups about the same event, which facilitates the contextualisation of the photographers' work. To this end, the structure of the reports, as indicated by the originals, which are kept at the Barcelona Photographic Archive, has been respected.

There is also a Web version of the exhibition. This provides access to the Pérez de Rozas photographs that can be seen in the kiosks together with a selection of other photographs on display in the exhibition hall. This online version of the exhibition incorporates a novel attempt to link historical memory with new technologies by means of crowdsourcing. Users who so wish can take part by providing first-hand information about each of the photographs and by improving their description. In this respect, the Web version represents a new contemporary dimension to the Crònica Gràfica, which is now open to participation by everyone.

The exhibition could be visited until 21 May 2016, from Monday to Saturday from 10 a.m. to 7 p.m. (closed on public holidays except saint Eulalia week). The exhibition was curated by Andrés Antebi, Pablo González and Teresa Ferré of the Observatory of Daily Life, an independent organisation that is working on a project entitled, 'The veiled image', which aims to rescue and disseminate the biographies and photographic archives of some of the most important photojournalists during the first decades of the 20th century in Catalonia, many of whom are still little known. 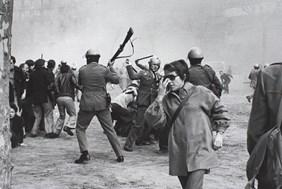 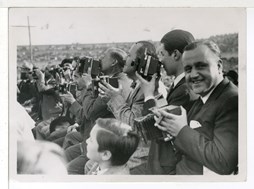