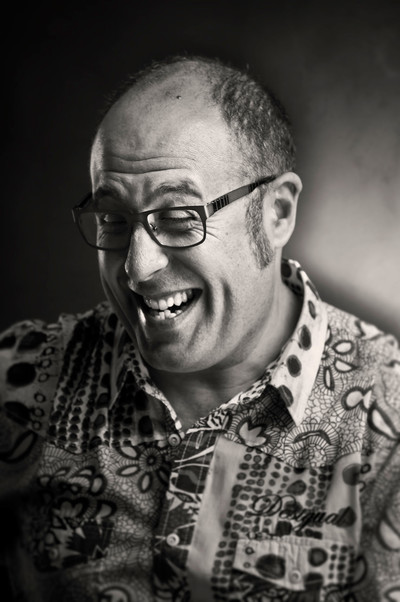 The MacAndrews photo album of the Barcelona Maritime Museum

Barcelona Maritime Museum's MacAndrews photograph album brings together images of the offices, ships and staff of the MacAndrews Shipping Company in Spain and North Africa. According to the back cover, the album was collated and presented to the company in 1949. Later it was donated to the Maritime Museum by a private individual, together with a book of company accounts. It is not known when they were donated since there is no accompanying letter, but whatever the case, the date would be before 1994.

The album measures 20x26.5 cm (closed) and has 27 perforated pages and is bound with a cord. It contains 101 photographs in different formats, produced using different photographic processes (DOP, or Developed out Print, and POP, or Printing out Paper) and photomechanical techniques (collotype, rotogravure and letterpress halftone)1. Almost all the pages have ink inscriptions describing the contents of the photographs. 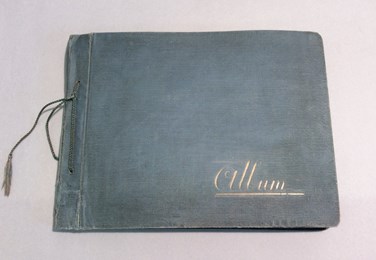 The album binding is very simple and consists of laterally perforated hard covers with a cord binding them and the pages together. The material from which the covers are made, a bluish fabric, has deteriorated, especially at the spine and at the edges, where the original shape has become deformed and with some frayed fibres showing. The pages inside, bluish green in colour, have faded at the edges and have torn, especially at the spine's centre fold. One of the pages has separated completely in two parts. Further damage can be observed in some other pages. 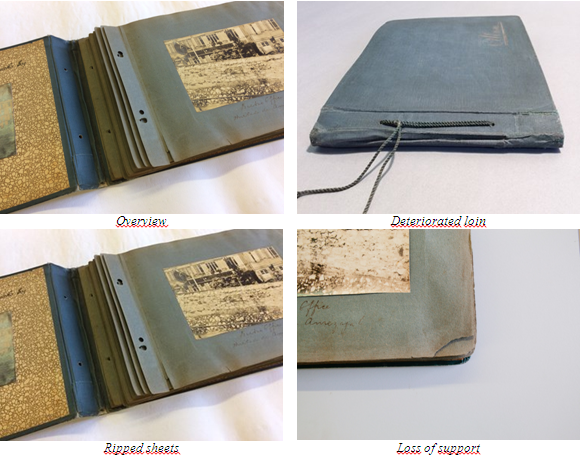 The photographs inside have deteriorated in different ways depending on the photographic process with which they were produced.

Both the DOP and POP photographs have yellowish stains and alterations in image tone. This deterioration is due to inappropriate storage and unfavourable environmental conditions, such as relative humidity and high temperatures, as well as the low quality of the materials, the paper and the album's acidic cardboard which have been vey much affected over the course of time. The adhesive used on the pages of the album has also affected the photographs, and image fading can be observed in those areas where the adhesive was applied. This adhesive also seems to have stained the surface of some of the photographs. Stains, caused by chemical contamination during the copying process, can also be observed on the surface of the emulsion. 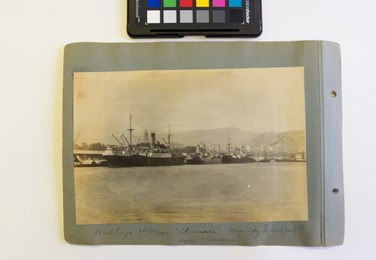 Intervention on the album

The way to proceed with photographic albums is a complicated issue. An album is a richly meaningful object in which the photographs are not isolated but form part of a whole, which we should not disassemble. A photograph album contains within it, as well as the photographs themselves, evidence of many decisions made by the person who compiled it. Editing, ordering, writing the inscriptions, these are all elements that tell a story and to separate them would be to loose something very valuable, something that would seriously detract from the value of the photographs if they were isolated images. Work on an album should always, therefore, be minimal in order to keep all of its parts united.

A photograph album is also a complicated issue when considering preventive conservation,. Many of the elements from which an album is made, such as paper, cardboard, glues, fabrics, inks and pigments, deteriorate over time and the photographs, although they form part of a whole, are the soul of that whole. If we separate the photographs in an album to protect them from the other elements, the acidity of the paper to which they are attached, for example, we would probably endanger the photograph's integrity and damage the pages of the album. That is why the intervention on albums is usually minimal, even if it does include a thorough cleaning of all the elements and the addition of interleaving, or protective barriers, to shield the photographs from the album's other elements.

Firstly, the binding was undone in order to be able to deal with each element, the photographs, pages and binding, individually. The following procedures were then followed:

Cleaning of the album pages. This was achieved using a synthetic rubber eraser and a cotton cloth. Before cleaning, tests were performed to ensure that the eraser did not remove any colour from the paper or any of the ink inscriptions that appear on every page.

The photographs were cleaned with a soft Hake art brush and a museum vacuum cleaner (Museum Vac). Some of the photographs presented dirt stains on the emulsion. These were cleaned with ethanol applied with a cotton bud, with good results. Fragments of paper were found attached to the surface of some photographs. Having previously dampened the affected area with ethanol, these were removed with a scalpel. It was sometimes not necessary to dampen the areas affected.

After a test with a cotton bud moistened with water had established that the pigment would not be affected, the gilt decoration on the album cover was cleaned by moistening it with water, but some dirt remained.

Once the pages and photographs had been cleaned, a museum vacuum cleaner (Museum Vac) was used to remove any remaining fragments of rubber or dirt to be found in the album, especially from the folds in the covers, but not from the photographs themselves, which had already been vacuumed.

Almost all the album pages had tears due to wear and the fragility of the material. For the consolidation of the pages a Japanese paper was used, in combination with an adhesive called Tylose® MH30016, which was applied in a dilution of 40 g per litre of water with a paintbrush. To minimise the visual impact of the consolidation it was necessary to stain the Japanese paper with a colour similar to that of the pages. This was done with watercolours. Once dry, and in order to imitate even more accurately the colour of the pages, the grafts of Japanese paper were retouched with watercolour crayons in three colours, yellow, brown and blue.

To protect the photographs and minimise the effect on them of the acidity of the album's paper pages, protective interleaving sheets were added between the pages2. The sheets used were Heritage Archival Photokraft White, 90 g, produced by Conservation by Design3. Before adding them it was necessary to ensure that the spine, and the binding itself, were capable of supporting the extra thickness.

The album now reposes in the Museum's archive in appropriate environmental conditions: 40% RH and a temperature of around 18º C. The acidity of the paper with which the album was made, and the glues used on the paper and exterior cardboard, as well as the adhesive used on the photographs, continue to pose a threat for the photographs, which can not be removed from the pages of the album. Nevertheless, these environmental conditions will minimise any future deterioration. 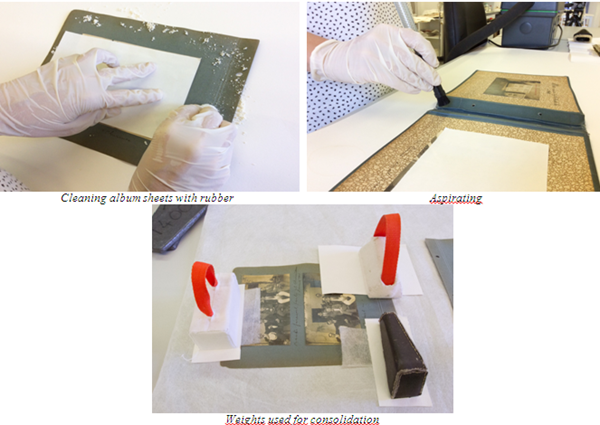 Digitalisation of the album

The album was digitalised using a camera. Ethafoam was used to counteract the height of the spine when the album was fully open. ColorCheker was used for colour calibration. 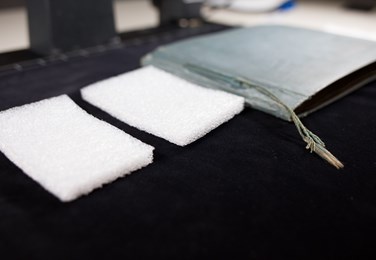 Ethafoam used during the digitalization

1. Gawain Weaver published a good resource for the identification of these photomechanical processes. It can be consulted and downloaded here: http://gawainweaver.com/images/uploads/Process_ID_Chart_Photomechanical.pdf [Consult. Junio de 2016]