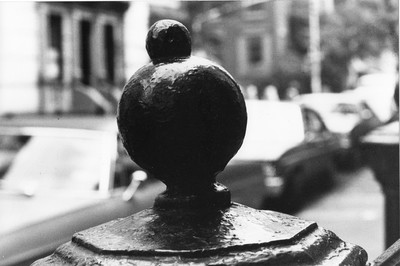 The Daguerre-Giroux camera at the Royal Academy of Science and the Arts of Barcelona.

"I have found a way to fix the images produced in the camera obscura!"
"I have surprised the fleeting light and fettered it!"
"I have made the sun paint pictures for me!"

It was with these words that, one day in 1824, the painter and businessman, Louis-Jacques-Mandé Daguerre (1787-1851), burst into Vincent Chevalier's optician's shop on the Quai de l'Horloge in Paris. Vincent Chevalier and his son Charles were renowned for the microscopes and telescopes they made, and it was at their shop that Daguerre bought his lenses.1

Years later Charles Chevalier would write in his memoirs that Daguerre had, perhaps, claimed victory too early.2 It was not until the end of 1835, in an article published in the Journal des Artistes that mention was first made of the fact that Daguerre had found, "the way to capture images produced by a camera obscura on a plate prepared to receive them".3 By then two years had passed since the inventor, Joseph Nicéphore Niépce (1765-1833), who had worked with Daguerre on the possibility of fixing the images produced by the camera obscura, had died.

The official announcement of the complete daguerreotype process, the first operationally and commercially viable photographic procedure in history, was made on 19 August 1839 at the Academy of Science, in Paris, by the scientist and politician, François Arago (1786-1853). Three months later, at a public event organised by the Royal Academy of Science and the Arts of Barcelona (RACAB), the first photographic meeting in Spain was held. Using a Daguerre-Giroux camera acquired in Paris, the engraver, Ramon Alabern i Moles (1811-1888), produced a daguerreotype image of a view of the buildings in the Pla de Palau in Barcelona. The role played in this photographic history by the scientist and doctor, Pere Felip Monlau i Roca (1808-1871), a member of the RACAB, was of fundamental importance given that it was he who organised the purchase of this equipment from Alabern himself.

2014 marked the 175th year since this first photograph was taken and this was the theme for the exhibition, "The Daguerreotype. The beginning of photography", organised by the Barcelona Photographic Archive. The exhibition catalogue provided new details about this event and about Ramon Alabern himself.4 The RACAB had custody of the camera with which this first daguerreotype was produced from 1839 onwards, but it has now been lost.5

FROM THE CAMERA OBSCURA TO THE PHOTOGRAPHIC CAMERA

At the beginning of the 19th century the portable camera obscura, an optical instrument that had been well known since the 17th century, became a photographic camera. With this new equipment it was no longer a question of watching the world go by in movement through a ground glass screen, which would later be traced in pencil on paper. What was required now was to capture the scene seen on glass, its reflected light, and that meant knowing how to print from a photosensitive medium to fix the light and thereby obtain an "detained and permanent image of the world".

The new and revolutionary operation required more than just the study and careful application of chemistry and optics. It was also the result of other ways of conceiving the world, new ways of thinking and new ways of looking, that had started to converge in Europe at the beginning of the 19th century. This new scenario called for a new optical instrument conceived for photography, not drawings. The first photographic camera to be sold was Le Daguerreotype in 1839.

Le Daguerreotype was the first photographic equipment to be sold in the world. It was designed by Daguerre himself and was sold in Paris by Alphonse Giroux et Cie. i Susse Frères, with a lens made first by Chevalier and then also by Lerebours.

Daguerre's invention was an instant success despite the heavy weight of the complete kit and its high price of 400 francs. It would seem that no more than twelve cameras of this type have survived. All the ones that have are exhibited in museums and scientific institutions.

The RACAB's camera includes the seal of guarantee of the seller, Alphonse Giroux et Cie. It is signed by Louis Daguerre and has the number 178. It is in very good condition. Other elements of the kit that have survived are the box of chemicals and the box for storing the plates. The camera is of fundamental importance for the history of science and photographic technique, but there are other aspects to it which make it unique.

– As the poster from 1839 announced, it was this camera that was used to take, "The first image obtained in Spain by means of the marvellous daguerreotype procedure".

That is why it has of such symbolic and historical importance for our city and our country.

– The RACAB's camera, together with the camera held by the University of Uppsala Department of Physics in Sweden, which was acquired in 1841, seem to be the only two of their kind that are still owned by the same institutions that acquired them in the 19th century.

– The holding of a photographic meeting with the aim of obtaining the first photograph to be taken in a country would seem to be an event without parallel in the history of photography.

THE RESTORATION AND RESEARCH PROJECT

The photographers Martí Llorens, a Fine Arts graduate from the University of Barcelona and Rebecca Mutell, doctor of Fine Arts, also from the University of Barcelona, led a restoration and research project on this camera. They are interested in research, teaching and artistic practice through historical photographic procedures, and they bring these activities together under the name of Factoria Heliogràfica.

The first phase consisted of restoring the equipment in such a way as to ensure its future conservation. This task was carried out by Rafel Forga, a Fine Arts graduate from the University of Barcelona, specialised in the conservation of 19th-century photographic equipment and the construction of equipment for use in historical photographic procedures.

A video of the restoration of the RACAB's Daguerre-Giroux camera has been made by Lalo García and produced by Txell Sabartés.

Finally, the restoration work has been kindly funded by the art collectors, Valérie de Marotte and Vicenç Boned who, until a year ago directed the photographic gallery Tagomago in Barcelona.

Now that the restoration work has come to an end, our aim is to carry out multidisciplinary research that will more closely associate RACAB's camera with all the others of this kind that survive throughout the world, and to raise its profile while also generating new theoretical material that will contribute to a fuller history of the origins of photography in our country.

It is, in sum, a question of appreciating and raising awareness about a camera that can be considered the very starting point for photography in our country.

When we recall that first photograph taken in 1839 of the Pla de Palau in Barcelona by the engraver, Ramon Alabern, it is both moving and surprising to learn that, according to Google and the Sightmaps web, Barcelona was, in 2014, the third most photographed city in the world, after New York and Rome. 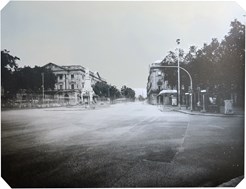