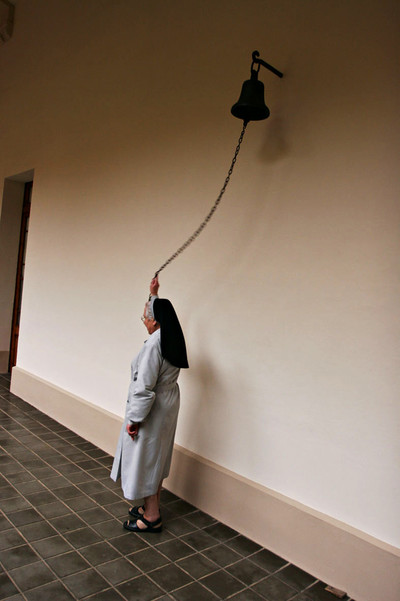 Early in 1839, when the scientist Francesc Aragó, a native of Roussillon, presented Daguerre's great invention in Paris, there was a large group of Catalans living in the city, attracted by the breeze of modernity to be experienced there1. Their interests were very varied, from their studies to politics and science, amongst others. Some of them could not resist the appeal of the daguerreotype and became captivated by this new way of representing the world. From then onwards, to a lesser or greater degree, they would actively participate in the dissemination of this technique in Catalonia and throughout the rest of Spain.

Although the names of the main people responsible for introducing the daguerreotype to Catalonia are well known, the doctor and journalist Pere Felip Monlau i Roca (Barcelona, 1808 - Madrid, 1871) and the engraver Ramon Alabern i Moles (Begues, 1811 - Madrid, 1888), it is only fair to also mention Dr. Joaquim Hysern i Molleras (Banyoles, 1804 - Madrid, 1883), who was involved in the one of the first translations of Daguerre's manuals2 and who sent a daguerreotype camera from Paris to Joan M. Pou i Camps, Josep Camps i Camps, and Marià de la Pau Graells in Madrid. They were all members of the Barcelona Academy of Science and it was with this camera that they took the first daguerreotype for the royal court on 18 November 1839. We should also mention the doctor and politician, Pere Mata i Fontanet (Reus, 1811 - 1877), who had lived in exile in Paris since 1838 and was the author of one of the first translations of Daguerre's manual3; the pharmacist and journalist, Josep Oriol Ronquillo i Vidal (Barcelona, 1806 - 1876), who had also been living in exile in France since 1838, a personal friend of Monlau, and author of a little known translation on the daguerreotype technique that was included in the third volume of Secretos novísimos de Artes y Oficios, in which we also find a long article on Talbot's technique4, as well as a translation of the document he had presented to the Royal Society in London in February 1839, in which the steps are described for the preparation of photographic paper on which to fix the image permanently. 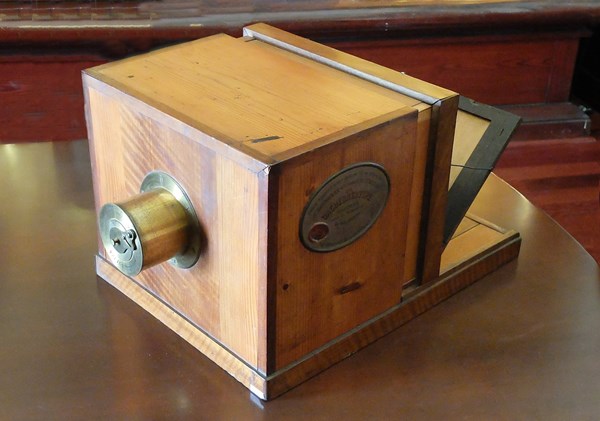 Giroux Chamber of the Royal Academy of Sciences and Arts of Barcelona with the aim of Verres Combinés. Photo: Arxiu Fotogràfic de Barcelona (c) AFB

Let us, however, concentrate on the person who is the main object of our attention, Ramon Alabern i Moles, the first Catalan photographer in history. On 10 November 1839 it was Alabern who took a daguerreotype of the Pla de Palau in Barcelona. It was the very first daguerreotype to be taken in the whole of Spain.

Eleven months previously in Paris, on 7 January 1839, the scientist and republican politician, Francesc Aragó, had described to the members of the Académie des sciences a procedure whereby an image created in a camera obscura could be mechanically reproduced in a surprisingly clear and detailed way. The extraordinary news spread like wildfire and, over the course of time, would lead to one of contemporary history's most fabulous developments. The press in Barcelona was quick to give echo to the news that same January. Pere Felip Monlau, exiled in Paris and with the innate curiosity of a scientist, immediately became interested in the new invention. By mid March he had already sent his first report about the daguerreotype. During the third week of June, he sent his second report to the Academy of Sciences in Barcelona.

In August Aragó described the daguerreotype procedure to the members of the academies of science and fine arts in Paris. It was at this time that Monlau was starting to prepare to return from exile. He would disembark at the port of Barcelona on 2 September and events would move swiftly thereafter. The Academy of Sciences in Barcelona held a general literary meeting on 6 November that would be of great historic importance. They listened to Monlau's explanations and then he showed them a silvered copper plate on which was an image of the Place de la Madeleine, which Ramon Alabern had made in Paris. It was decided to purchase the daguerreotype camera which Alabern had just brought to Barcelona from Paris. It was a Giroux camera, offered for sale in Paris in August 1839. It is still kept at the Royal Academy of Sciences and the Arts in Barcelona. On 8 November, commissioned by the Academy, Monlau, Roura and Mer, purchased the camera from Alabern. That same day El Constitucional newspaper, directed by Monlau, reported that Alabern had received all the necessary practical lessons for its use from Daguerre himself, in Paris.

Leaflets were distributed in Barcelona announcing the programme for 10 November 1839 at the Plaça de la Constitució, today's Pla de Palau. The verified public demonstration of the daguerreotype that day was conducted with the utmost attention to detail, although the weather, cloudy and windy, was not very propitious. The leaflet said, "The first view to be captured will be of the Llotja building and the beautiful block containing the Casa Xifré". The scientific committee, with their daguerreotype equipment, were assembled on a small balcony, which is still there on the corner Carrer General Castaños and Pla de Palau. At around 12.45 p.m. the plate was inserted into the camera and exposed to light for some twenty minutes. Ramon Alabern's test at the Pla de Palau in Barcelona was a complete success and this first daguerreotype was raffled on 14 November amongst the 103 tickets sold to cover the costs of the event, all track of it being lost from the moment the winner came by to collect it at the doors of the Academy of Science. It has never been recovered.

On 17 November Ramon Alabern performed another test with the daguerreotype, this time from the balcony of the Academy of Natural Science in the Ramblas, and the camera was pointed at the Palau Moja and the Casa Rocafort, at the end of Carrer de la Portaferrisa. The following day he took two more, one of the customs building in the Pla de Palau, taken from the Casa Xifré, and the other of the Casa Xifré, taken from the convent of Sant Sebastià, which no longer exists but which used to stand on the site of today's Plaça d’Antonio López. There is no documentary evidence of Ramon Alabern i Moles having taken any other daguerreotypes, but it seems likely that he continued to experiment with the camera he had brought from Paris.

The Academy of Natural Science of Barcelona asked Ramon Alabern to give a course on how the daguerreotype worked. This he did, starting on 20 November and, according to the records kept at the Academy's archive, the course was attended by seven people. It seem inconceivable that, during this practical course, no more plates were exposed, but none seem to have survived. Some years later Ramon Alabern asked the Academy for a certificate stating that he had given a course in which, for no fee, he had, "taught a large number of artists and enthusiasts", which would indicate that a larger number of people took part than is recorded in the official archives.

After 1839 Ramon Alabern's name was associated with the daguerreotypes used to make the steel engravings published in the volume devoted to Catalonia of, España. Obra pintoresca en láminas, ya sacadas con el daguerreotipo, ya dibujadas del natural, grabadas en acero y en boj. Some of these daguerreotypes were attributed to Ramon Alabern, but we have no evidence that he made them. It might very well have been Alabern, but it could have been someone else whose identity is now not known. With regard to the engraving included here, depicting the Llotja building and the Passeig d’Isabel II, often confused with the first daguerreotype to be taken in Barcelona, it should be clearly stated that, although the scene is the same, it is taken from a different angle. The engraving of this scene, by Antoni Roca, is based on another daguerreotype, not the first one taken by Alabern.

The most accurate professional description of Ramon Alabern i Moles is as an engraver, more specifically, a steel engraver, a profession he exercised throughout his life. We should not forget, however, that he was also a geographer, hence his specialisation in cartographic engraving, the study of which had led him to Paris in 1839. In 1866 he wrote, "I have spent thirty years engraving geographical works"5. Furthermore, ten years later, in 1876, his name appears amongst the founding members of the Madrid Geographical Society, listed in the Society's first publication. It should come as no surprise, therefore, that in 1923, thirty-five years after his death, the Royal Geographical Society's journal, successor to the previous publication, should devote an article to our photographer with the title, “The geographer D. Ramon Alabern”, the first sentence of which reads, “Missing from the list of Spanish geographers and cartographers of the last century is one who demonstrated his special and extraordinary gifts as a cartographer, D. Ramón Alabern y Moles”6, followed immediately by a list of his main works as a cartographer. 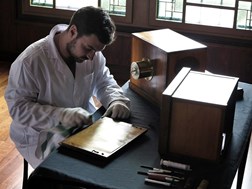 The Daguerre-Giroux camera at the Royal Academy of Science and the Arts of Barcelona.