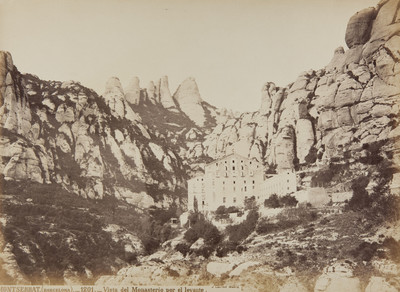 The photographic perspective in the work of Àngels Ribé

The work of Àngels Ribé (Barcelona, 1943) is essential for an understanding of contemporary conceptual art as part of its international panorama. We consider her to be a pioneer whose work extends from photography to performance, from installation to sculpture. She has a constant sense of space, shape, and an understanding of the world through her own body. The role of photography has been of great importance in the development of her work, used as a witness and the main register of her actions and performances, and also as an instrument of her gaze, silently capturing the setting's imperceptible details, or methodically registering her walk, her body, space and the shapes surrounding her, to reveal a grammar of fragility of fleeting moments in the face of the "masculine hierarchy of perpetuity1".

From the outset, Ribé's work aimed to overcome minimalist logic through the use of her own body and by exploring nature through a variety of ephemeral actions captured through photography or on video for their later incorporation into other media such as drawing, sculpture and performance, marking a dematerialisation of the work of art and, consequently, changing the established rules to demarcate a place between the observer and the art work.

A large part of her work has been done in urban or natural spaces, thereby generating a consideration of the relationship between the public and the private, the internal and the external, in our daily lives. One of the key thinkers on this topic was Henri Lefebvre, whose research into urban space created a rupture in the way artists at the time related to it. Lefebvre conceived the city as a social space, transcending architecture to become a container of relations and exchanges, a space for action2. Many artists at the time worked with this premise in mind, intervening in, and acting on, the urban space. Artworks at the time were not conceived as objects of artistic worth, but rather as ephemeral gestures, interventions and small observations in which the artist sought to raise questions about the hierarchical relationship between the work of art, the observer, and the space in which they converge. In this regard, Ribé's first works stem from this premise as spaces, not just as the containers of the artistic object, but for relationships and exchange of meanings, giving rise to a body of work in constant transformation. 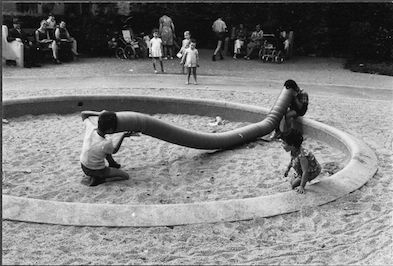 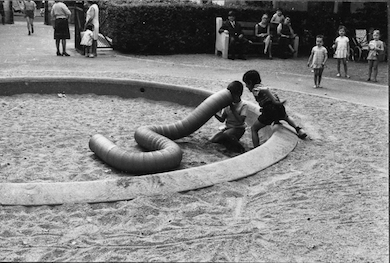 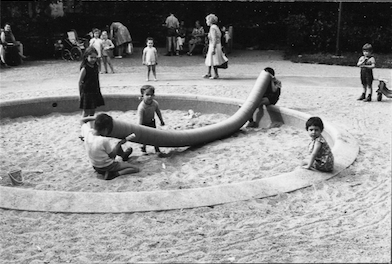 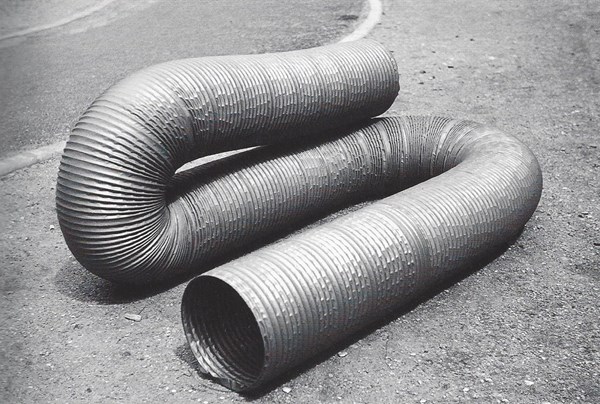 A good example of this is the work, Acció al parc, Paris (1969). The artist placed a flexible tube, of the sort commonly used in construction work, in a children's playground and it soon attracted the curiosity of children who approached it and began to play while the artist photographed the various positions the tube adopted as a result of the children's games.

The act of walking as an artistic practice was an important characteristic of the modus operandi of artists at the time, their wanderings determining the relationship and interaction of the body with its environment. The spaces and things thereby found generated symbolic exchanges registered by the artist, who intervened, or who was simply an observer who stopped to look. Michel de Certeau speaks of the act of walking as a process of enunciation that is discursive but not narrative3, a creation of trails that can be read as a search for meaning. Walkers, by walking, enunciate their history, a discourse relating to the place/non-place of concrete existence, a tale crafted with elements taken from common sayings, an illusive and fragmented history whose gaps match the social practice it symbolises.

In Two Main Subjective Points on an Objective Trajectory (1975), Ribé shows us, through a series of photographs, her journey, there and back, over the Williamsburg Bridge in New York. In it she highlights two subjective points in an objective journey that had been determined by the artist herself, with which she questions the ways of perceiving and interacting with space, as well as drawing attention to the possibility of imbuing the ordinary and neutral moments of our routine urban movements with value. In Invisible Geometry 2 (1973), on the contrary, it is the movement of the camera in front of the same image that produces a greater tension or questioning with regard to geometrical perception.
Ribé's art works through a poetic logic of perception. Geometry consequently figures highly in her work, as well as the discovery of various forms in space, which are associated in isolation in order to decontextualize them. In Associations 2, 3 and 4 (1973), the artist photographs footprints, lines and cracks which, being photographed with no regard for scale, can be conceptually linked together to generate a cartography as a constant witness to this relationship between her body and her thought. 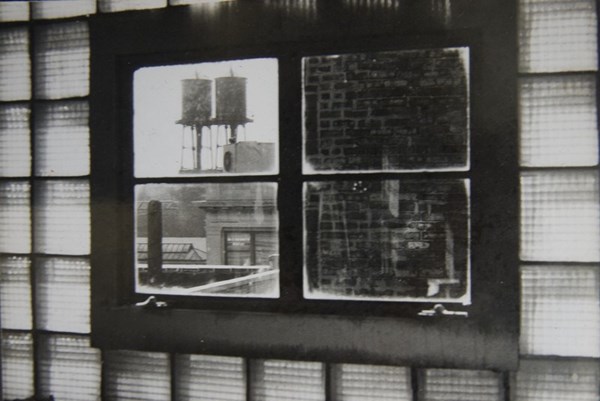 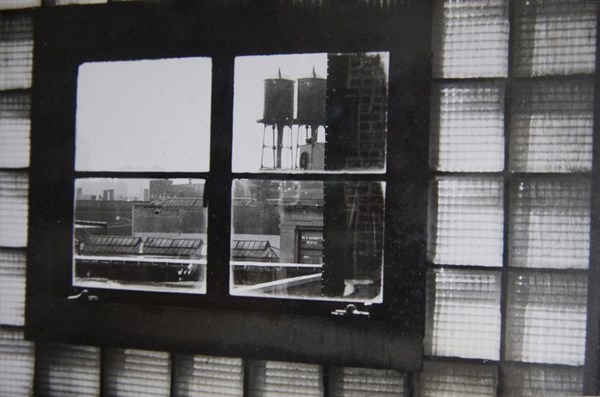 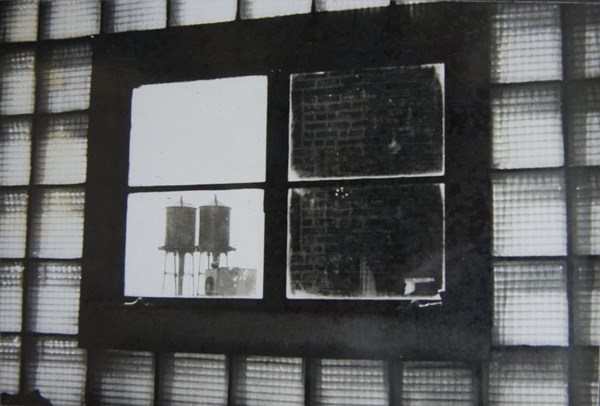 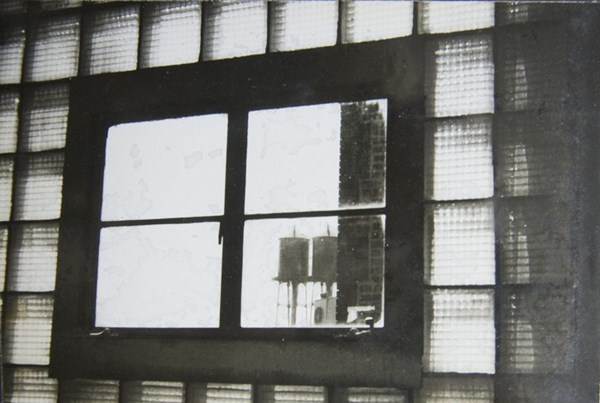 In 1979, Ribé carried out a project that would eventually be exhibited at a university school in Sant Cugat del Vallés. It was entitled, Ornamentació (1979), a series of slides about ornamental shapes which, thinking about sculpture, constitute a repertoire of shapes and colours to be found in the Catalan urban space. Shortly afterwards she would repeat the process in New York, but now using 35 mm film in black and white. This work shows, not only her interest in geometrical forms, but also for forms that are "dispossessed of their content and function, like permanent vehicles of communication, capable of transcending their historic time"4. Her interest is in the appearance of objects separated from their specific function and so, on photographing them, and showing them in relation to each other, she endows them with a structure different from the one they previously signified, making them, sculpturally speaking, something else.

When we look at the work, Association: Cut: Solution of the Skin's Continuity (1973), we understand the wound as an interruption in the natural continuation of skin which, seen in the public space as a crack, works as a symbolic element representing the relationship between the urban and the psychological. Ten years previously, she wrote in the magazine, Internationale Situationniste5 of the term “psychogeography” as “the study of the precise effects of the geographical medium, consciously or unconsciously, on the behaviour of the individual". We therefore see in Ribé's work a duality which constantly manifests itself as an internal division, a constant struggle between two forces, a contest of opposites6. It is this duality, in various media, which generates a constant questioning of the place of the work of art, the observer and the artist, that makes Ribé's work a fundamental experience of that time.

In these moments,we can visit the exhibition “My Corps, My Sprit” in the gallery Ana Mas Projects, until 9th March.